‘t Schaep in Mokum’ is situated in 80’s Amsterdam. Riek and Arie sold the hotel in Spain and returned to Amsterdam with the others. Door and Kootje are finally living together and they decide to start a bar; ‘t Schaep. They’re partly the grandparents of Lenas son as well. Hip and Greet are starting a haberdashery store. Opoe’s daughter, Jaqcueline, is also finally part of “the group”, but this isn’t cordially. Still, Opoe is being missed by everyone, and Opoe misses everone too.

Storm did the edit, motion graphics, visual effects and color grading for this television serie. Season 4 – 8 episodes of 50 minutes. 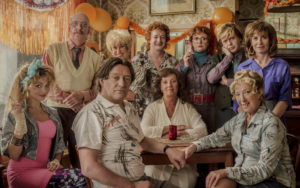